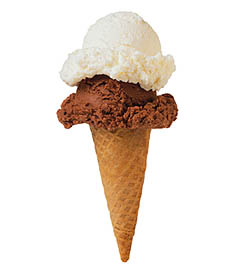 An ice cream cone, poke or cornet is a dry, cone-shaped pastry, usually made of a wafer similar in texture to a waffle, allowing ice cream to be eaten without a bowl or spoon. Various types of ice-cream cones include waffle cones, cake cones (or wafer cones), pretzel cones, and sugar cones.

Edible cones have been mentioned in French cooking books as early as 1825, Julien Archambault describes a cone where one can roll “little waffles”. Another printed reference to an edible cone is in Mrs A. B. Marshall’s Cookery Book, written in 1888 by Agnes B. Marshall (1855–1905) of England. Her recipe for “Cornet with Cream” says that – “the cornets were made with almonds and baked in the oven, not pressed between irons”. influential innovator who published two recipe books and ran a school of cookery.

In the United States, ice-cream cones were popularized in the first decade of the 20th century. On December 13, 1903, a New Yorker named Italo Marchiony received U.S. patent No. 746971 for a mold for making pastry cups to hold ice cream; he claimed that he has been selling ice cream in edible pastry holders since 1896. Contrary to popular belief, his patent was not for a cone and he lost the lawsuits that he filed against cone manufacturers for patent infringement.

According to one legend, a Syrian pastry maker, Ernest Hamwian, who was selling zalabia, a crisp pastry cooked in a hot waffle-patterned press came to the aid of a neighboring ice cream vendor (perhaps Arnold Fornachou or Charles Menches) who had run out of dishes; Hamwi rolled a warm zalabia into a cone that could hold ice cream. However, numerous vendors sold pastries at the World’s Fair, and several of them claimed to have invented the ice-cream cone, citing a variety of inspirations. Hamwi’s story is sourced from a letter he wrote in 1928 to the Ice Cream Trade Journal, long after he had established the Cornucopia Waffle Company (later the Missouri Cone Company). Nationally, by that time, the ice-cream cone industry was producing some 250 million cones a year.

The owners of Doumar’s Cones and BBQ in Norfolk, Virginia claim that their uncle, Abe Doumar, also a Syrian, sold the first ice-cream cones at the St. Louis World’s Fair. Other World’s Fair vendors who claimed to have invented the cone include Nick and Albert Kabbaz, David Avayou, Charles and Frank Menches, and Saba Najjar. Doumar’s Cones and BBQ is still running today.

The first cones were rolled by hand but, in 1912, Frederick Bruckman, an inventor from Portland, Oregon, patented a machine for rolling ice-cream cones. He sold his company to Nabisco in 1928. Nabisco is still producing ice-cream cones, as it has been since 1928. Independent ice-cream providers such as Ben & Jerry’s make their own ice-cream cones.

The idea of selling a frozen ice-cream cone – so that the cone and the ice-cream could be one item, storable in a freezer – had long been a dream of ice-cream makers, but it wasn’t until 1928 when J.T. “Stubby” Parker of Fort Worth, Texas created an ice cream cone that could be stored in a grocer’s freezer. To market it, he formed The Drumstick Company in 1931. In 1991, The Drumstick Company was purchased by Nestle. In 1959, Spica, an Italian ice-cream manufacturer based in Naples invented a process, whereby the inside of the waffle cone was insulated from the ice-cream by a layer of oil, sugar and chocolate. Spica registered the name Cornetto in 1960. Initial sales were poor, but in 1976 Unilever bought out Spica and began a mass-marketing campaign throughout Europe. It is now one of the most popular ice creams in the world.

Some brands produce something very similar to the traditional ice-cream cone, but with a flat bottom, which enables it to stand upright without danger of falling. These types of wafer cups are called “kiddie cups”, “cake cones”, or “cool cups”.

A variety of cone exists that allows two scoops of ice cream to be served side by side, instead of the usual straight up order. The side-by-side variety has been the standard “double-header” in Australia for many decades, the ‘two-up’ variety is a relatively recent innovation in Gelato shops mostly. The side-by-side variety in the footnoted illustration is an inferior version that tends to fracture easily at the base of each ‘cup’, the Australian variety has the base of the cone flared out more to buttress the two separate cups.

A premium variety of cones has the top covered in solid chocolate sauce.