A History of the Paella

Did you know?  Many non-Spaniards view paella as Spain’s national dish, but most Spaniards consider it to be a regional Valencian dish. Valencians, in turn, regard paella as one of their identifying symbols. 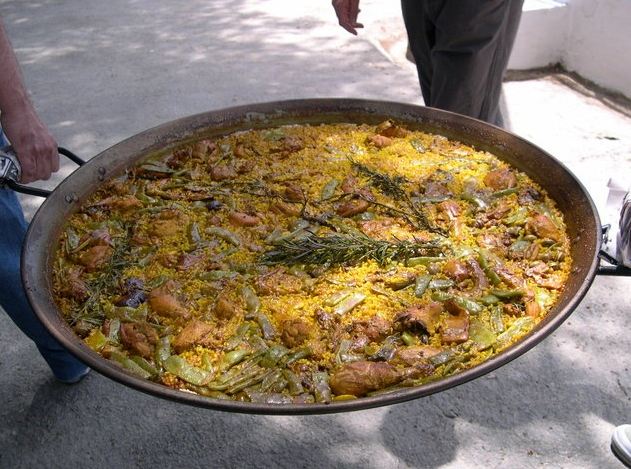 On special occasions, 18th century Valencians used paelleras to cook rice in the open air of their orchards near lake Albufera. Water vole meat was one of the main ingredients of early paellas, along with eel and butter beans. Novelist Vicente Blasco Ibáñez described the Valencian custom of eating water voles in Cañas y Barro (1902), a realistic novel about life among the fishermen and peasants near lake Albufera.
Living standards rose with the sociological changes of the late 19th century in Spain, giving rise to reunions and outings in the countryside. This led to a change of paella’s ingredients as well, these being rabbit, chicken, duck and sometimes snails. This dish became so popular that in 1840 a local Spanish newspaper first used the word paella to refer to the recipe rather than the pan.
The most widely used, complete ingredient list of this era was as follows: short-grain white rice, chicken, rabbit, snails (optional), duck (optional), butter beans, great northern beans, runner beans, artichoke (a substitute for runner beans in the winter), tomatoes, fresh rosemary, sweet paprika, saffron, garlic (optional), salt, olive oil and water. (Poorer Valencians, however, sometimes used nothing more than snails for meat.) Valencians insist that only these ingredients go into making modern Valencian paella.