A History of Duncan Hines

Did you know that Duncan Hines was a man before he was a brand?  He was an American pioneer of restaurant ratings for travelers, best known today for the brand of food products that bears his name.

Hines was born in Bowling Green, Kentucky. Working as a traveling salesman for a Chicago printer, by age 55 in 1935, Hines had eaten a lot of good and bad meals on the road all across the US. At this time in the United States, there was no interstate highway system and only a few chain restaurants, except for those in large, populated areas. Therefore, travelers depended on getting a good meal at a local restaurant.
Hines and his wife, Florence, began assembling a list for friends of several hundred good restaurants around the country. The list became so popular that he began selling a paperback book, Adventures in Good Eating (1935), which highlighted restaurants and their featured dishes that Hines had personally enjoyed in locations across America. The book proved so successful that Hines added another which recommended lodging.
In the late 1940s and early 1950s, Hines wrote a newspaper food column, Adventures in Good Eating at Home, which appeared in newspapers across the US three times a week (on Sunday, Tuesday and Thursday). The column featured restaurant recipes, adapted for home cooks, that he had collected during his nationwide travels.
In 1952, Duncan Hines introduced Duncan Hines bread to the world through the Durkee’s Bakery Company of Homer, New York. Principals Michael C. Antil Sr., Albert Durkee, and Lena Durkee, were the bakery proprietors. This was Duncan Hines’ first foray into baked goods. By 1953, Hines sold the right to use his name and the title of his book to Roy H. Park to form Hines-Park Foods, which licensed the name to a number of food-related businesses. The cake mix license was sold to Nebraska Consolidated Mills in Omaha, Nebraska, which developed and sold the first Duncan Hines cake mixes. In 1957, Nebraska Consolidated Mills sold the cake mix business to the US consumer products company Procter & Gamble. The company expanded the business to the national market and added a series of related products.
Also in 1957, Hines appeared as a guest challenger on the TV panel show To Tell The Truth.
Duncan Hines died of lung cancer on March 15, 1959. He was buried in Fairview Cemetery of Bowling Green, Kentucky, in the same series of Hines family plots as Thomas Hines. 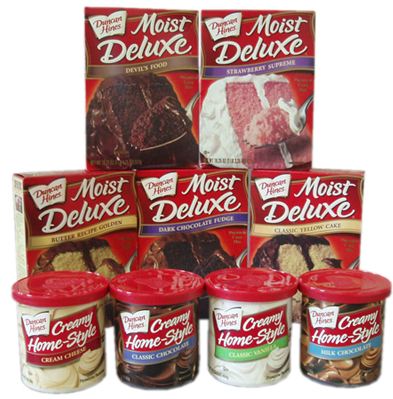