A History of the Easter Egg

Did you know that some European children still go door to door begging for Easter eggs just like American children do with candy on Halloween?  The practice is called pace-egging. 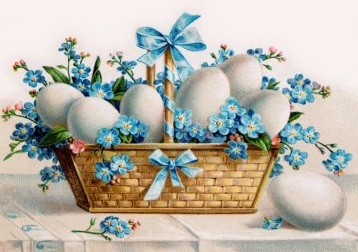 Easter falls in the spring, the yearly time of renewal, when the earth renews itself after a long, cold winter. The word Easter comes to us from the Norsemen’s Eostur, Eastar, Ostara, and Ostar, and the pagan goddess Eostre, all of which involve the season of the growing sun and new birth. The Easter Bunny arose originally as a symbol of fertility, due to the rapid reproduction habits of the hare and rabbit.

The ancient Egyptians, Persians, Phoenicians, and Hindus all believed the world began with an enormous egg, thus the egg as a symbol of new life has been around for eons. The particulars may vary, but most cultures around the world use the egg as a symbol of new life and rebirth. A notation in the household accounts of Edward I of England showed an expenditure of eighteen pence for 450 eggs to be gold-leafed and colored for Easter gifts. The first book to mention Easter eggs by name was written five hundred years ago. Yet, a North African tribe that had become Christian much earlier in time had a custom of coloring eggs at Easter. Long hard winters often meant little food, and a fresh egg for Easter was quite a prize. Later, Christians abstained from eating meat during the Lenten season prior to Easter. Easter was the first chance to enjoy eggs and meat after the long abstinence.