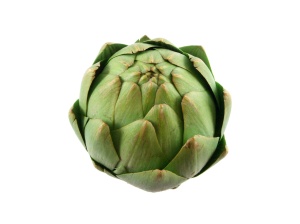 Here are today’s five thing to know about Artichoke:

The first mention of artichokes in literature was around 40-70 AD in a book on the medicinal uses of plants called The Greek Herbal of Dioscorides.

Artichoke was first  introduced the artichoke to France in the 16th century by King Henry II’s wife, Catherine de Medici. She said, “If one of us had eaten artichokes, we would have been pointed out on the street. Today young women are more forward than pages at the court.”