Here are today’s five things to know about cashews:

Pistachio, mango, cashew and poison ivy are in the same family.

Cashews are native to Costa Rica and most of Central America.

Cashews are seeds. Because they grow out of apples, they are technically a seed not a nut. 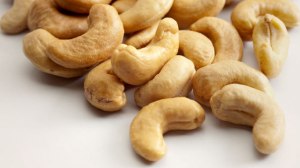 Raw cashews are green. Before the seed is roasted, cashews are a beautiful shade of green.

A freshly picked cashew nut is highly flammable and can even be explosive.