Sweet potatoes are the 6th most important food crop in the world.

Asia accounts for 90% of the world consumption of sweet potatoes. 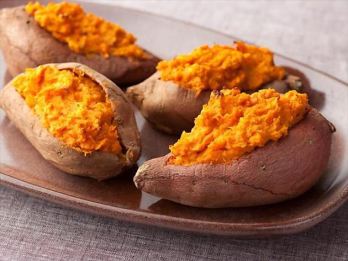 Sweet potatoes are actually tuberous roots which are considered one of the worlds most nutritious foods in the vegetable kingdom.

Despite the physical similarities of yams and sweet potatoes. They actually are not even closely related. Yams are closely related to grasses and lilies. 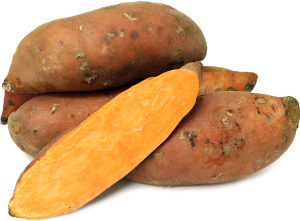 On This Day in Food History…1665 Rudolph Jacob Camerarius was born. A German botanist, he showed the existence of sexes in plants, and identified the stamen and pistil as the male and female organs.
1876 Canned sardines went on sale in the U.S. for the first time. They were packed in oil.
1889 H.L. Hunt, the pioneering Texas oil millionaire (Hunt Oil Company) was born. He carried a brown bag lunch to his office each day and considered himself as‘just plain folks.’
1958 ‘Sugartime’ by the McGuire Sister topped the charts.
2002 New regulations to go into effect this year require German pig farmers to spend at least 20 seconds every day with each pig, 10 seconds in the morning and 10 seconds in the afternoon. I do not know about what regulations there might be for spending time with German cows, sheep, chickens and other farm animals.
2008 The USDA announced the largest beef recall of 143 million pounds of frozen beef from a California slaghterhouse.
This snack food month moment is brought to you by PopCorners Popped Chips!