Here are today’s five things to know about Spaghetti:

The word spaghetti is the plural form of an Italian word “spaghetto” meaning “thin string” or “twine.” 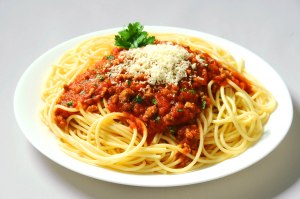 Pasta existed for thousands of years before anyone ever thought to put tomato sauce on it.

Italians never use a spoon and a fork when eating spaghetti.

The average person in Italy eats more than 51 pounds of pasta every year.

The world record for the largest bowl of spaghetti was set in March 2010 when the California restaurant Buca di Beppo successfully filled a swimming pool with more than 13,780 pounds of pasta.

Check out My Book!